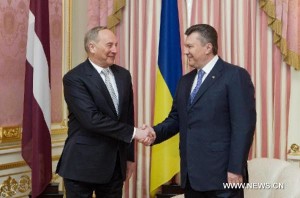 Ukraine 2014 is a repeat of Kyrgyzstan 2010 – a kleptocracy is overthrown by a violent revolution and we discover that the kleptocrats were using Latvian banks.

The article names the usual “dummy directors” from Parex Bank sister company International Overseas Services.  These directors have been involved in other gigantic crimes also, however Latvian prosecutors are not bothering them.  Instead, the prosecutors continue to threaten two whistleblowers with prosecution in order to dissuade future whistleblowers.

The European Union, United States, Russia, and Ukraine have been fully aware for 20+ years that the Latvian government is protecting a massive money-laundering racket.  However these governments have taken no action except to fraudulently provide more funding to the racket through the European Bank for Reconstruction and Development.

If you know anyone from the EBRD, please ask them why they are on the wrong side in Eastern Europe.